From Publishers Weekly: Chick lit doyenne Weiner offers airtight proof that the genre thrives with this clever, sad and sweet turn on Thelma and Louise–style rage. Juggling the politics of broken families, heartbreaking betrayal and shaky self-esteem, two girlhood pals—ugly duckling Addie and wounded beauty Valerie—reconnect after their high school reunion, where Valerie exacts a long-in-coming revenge on smug former beau Dan Swansea. But the payback gets more complicated when police chief Jordan Novick, nursing a broken heart and a crush-at-first-sight with Addie, is called in to investigate Dan's disappearance. Along the way, Val and Addie stage what may be the funniest not-quite-heist ever pulled off as they evade the heat over the missing Dan. The big payoff, of course, is that Addie and Valerie mend the mean-girls misunderstanding that drove them apart as teens and discover the shared pain and loss that bound them as kids and, once again, as adults. This beach read will win readers over with its wit and wisdom
Posted by UW-Stout Library at 4:31 PM No comments:

“The years from about 1950 to 1970 were the golden age of twang. Country music's giants all strode the earth in those years: Hank Williams and Johnny Cash, George Jones and Merle Haggard, Loretta Lynn and Tammy Wynette. And many of the standards that still define country were recorded then. Author Jennings pushes past the iconic voices and images to get at what classic country music truly means to us today. Yes, country tells the story of rural America in the twentieth century--but the obsessions of classic country were obsessions of America as a whole: drinking and cheating, class and the yearning for home, God and death. Jennings knows all of this firsthand: his people lived their lives by country music. This book is about a vanished world in which the Depression never ended and the sixties never arrived.  --From publisher description.
Posted by UW-Stout Library at 4:12 PM No comments:

The Dragon Hunters, voices of Forest Whitaker, Mary Mouser and Rob Paulsen. Directed by Guillaume Ivernel and Arthur Qwak. Animated. 2008.  Library Call Number PN1995.9.F34 D73 2009.
This movie version of a long-running French television cartoon series fills in the background of the main characters, and at the same time provides a visual feast and strikingly original and awe-inspiring animation.
Self-styled dragon hunters Lian-chu and Gwizdo, with their strange pet Gildas, meet a young girl named Zoe, looking for knights to answer the call of her great-uncle, old, blind Lord Arnold. The Lord will reward any champions who agree to slay the World Eater, a giant dragon at the end of the world. Time is running out, and the dragon is about to awake after his 30-year sleep. Accompanied by Zoe, the Dragon Hunters begin a mad quest, journeying across this land of floating islands and steep drops into the chaos and destruction at world’s end, where they will have to face their oldest and deepest fears
Posted by UW-Stout Library at 4:10 PM No comments:

The Man in the Glass Booth, starring Maximillian Schell, Lois Nettleton and Luther Adler. Directed by Arthur Hiller. 1975.  Library Call number: PR6069.H39 M36 003.
From the American Film Institute series of theater into film, comes this complex psychological drama about vengeance and justice, written by actor Robert Shaw. Schell plays millionaire Jewish businessman Arthur Goldman, who lives luxuriously in Manhattan and often discomforts his employees with his disrespectful observations of his fellow Jews. They are even more shocked when Israeli agents show up, arrest Goldman and fly him to Israel to stand trial as a despised Nazi war criminal. The Israeli prosecutor, Miriam Rosen (Nettleton), believes she has an airtight case against him and Goldman encourages her hatred of him by shedding his Jewish identity, becoming arrogant and spiteful; he demands to be tried in SS uniform. Set in a glass box in the courtroom so that no one can kill him before the sentence of death, Goldman is the quintessential SS exterminator.
This is a tour de force for Schell, who blazes away at his accusers, sneering at his former friends and the court, until the sudden, shocking ending.
Posted by UW-Stout Library at 8:13 AM No comments: 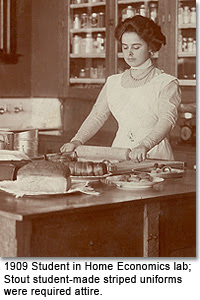 The University Archives/Area Research Center staff have developed a new database featuring recipes from cookbooks that were published by the institution as textbooks for students in the home economics department.  This database of recipes is established in honor of the University's heritage. Other recipes, which are from the older cookbooks found in the University Library's extensive cookbook collection, will continue to be added.

Search for recipes by recipe title, ingredient, or course (breads, desserts, etc.).
Give it a try at http://ezproxy.uwstout.edu/ics-wpd/cookbooks/index.shtml

Posted by UW-Stout Library at 11:36 AM No comments: