Spider Bones by Kathy Reichs.  Library Call Number: PS3568.E476345 S65 2010.
A book series growing in popularity among mystery fans and a hit series on the Fox network, the Bones books and programs feature a forensic anthropologist named Temperance Brennan.
From the publisher’s description:  “John Lowery was declared dead in 1968--the victim of a Huey crash in Vietnam. Four decades later, Temperance Brennan is called to the scene of a drowning in Quebec. The victim appears to have died while in the midst of a bizarre sexual practice. The corpse is later identified as John Lowery. But how could Lowery have died twice? Taking the remains to JPAC in Hawaii for reanalysis, Tempe is joined by her colleague and ex-lover Detective Andrew Ryan (how "ex" is he?) and by her daughter, recovering from her own tragic loss. Soon another set of remains is located, with Lowery's dog tags tangled among them. Three bodies--all identified as Lowery.”
Posted by UW-Stout Library at 5:12 PM No comments:

Nowhere Boy, starring Aaron Johnson, Ann-Marie Duff, David Threlfall and Kristin Scott-Thomas, directed by Sam Taylor-Wood. 2009.  Library Call Number: PN1995.9.B55N69 2011.
The story of a young boy in 1955 Liverpool, being raised by his aunt and uncle, with his father unknown and his erratic mother out of his life might be interesting enough.  But the boy will soon become known to the world as John Lennon, which makes this film adaptation of his young life extremely compelling.  His mother’s reappearance causes all the long-suppressed, intense family conflicts to boil over.
Ann-Marie Duff as the gypsy spirit of a mother and Kristin Scott-Thomas as the icy, strait-laced aunt give memorable performances.  Aaron Johnson is charismatic and compelling as young Lennon, at times a clown, at times a tortured soul.  The English accent is so thick you might need the subtitles, but the origin of the Beatles and the back story of the troubled soul that began Lennon’s love affair with music make this a must see.
Posted by UW-Stout Library at 5:09 PM No comments:

The Bro Code: How contemporary culture creates sexist men, a presentation of the Media Education Foundation; written and produced by Thomas Keith.      Library Call Number: BF692.5.B76 2011.
From the Publisher’s website: "Filmmaker Thomas Keith takes aim at the forces in male culture that condition boys and men to dehumanize and disrespect women. Keith breaks down a range of contemporary media forms, zeroing in on movies and music videos that glamorize womanizing, pornography that trades in the brutalization of women, comedians who make fun of sexual assault, and a groundswell of men's magazines and cable TV shows that revel in old-school myths of American manhood. Even as epidemic levels of men's violence against women persist in the real world, the message Keith uncovers in virtually every corner of our entertainment culture is clear: It's not only normal -- but cool -- for boys and men to control and humiliate women. Arguing that there's nothing normal, natural, or inevitable about this mentality, The Bro Code challenges young people, young men and women alike, to step up and fight back against the idea that being a real man means being sexist.”
Posted by UW-Stout Library at 2:12 PM No comments:

Whether it’s an Anne Rice book or the novels and movies in the Twilight series, vampires are enjoying a surge of interest. Despite the sensational cover, Laycock takes an academic approach to studying the idea of living on blood.  It turns out there are communities of people around the globe who self-identify as vampires.
From 1733, when the first scholarly research on human vampires was done in Germany, the author moves through history identifying the many places their presence has popped up.  Are they crazy?  Do they actually believe they are a differently evolved species?  As one description of the book puts it, “Is it a religion? A fantasy?  A medical condition?  Or a little bit of each?”
Laycock attempts to put the phenomenon into an historical and sociological perspective, uncovering a host of people and communities that give a glimpse into a world outside normal experiences and int the process writing a very readable book.  Perhaps the most intriguing sentence of the book’s preface comes when the author says he has driven around Cleveland with members of the Atlanta Vampire Alliance “looking for a good Irish pub.”
Posted by UW-Stout Library at 2:09 PM No comments:

The English Patient starring Ralph Fiennes, Juliet Binoche, Willem Dafoe and Kirsten Scott Thomas.  Directed by Anthony Minghella. 1996. Library Call Number: PN1995.9.W3 E65 2004
Winner of numerous awards, this is movie-making on an epic scale. Told in flashbacks of the life of a terminally burned, unknown man in a British military hospital during World War II, the story begins just before the war, in 1939, when Hungarian Count Laszlo de Almasy is mapping unexplored regions of the Sahara for the Royal Geographical Society during an archaeological expedition.  He, and his co-explorer, Madox, are soon given financial and moral support when Geoffrey and Katherine Clifton join their exploration.  Almasy and Katherine find a great attraction for each other and are soon involved in an affair that turns bad just as World War II erupts.  Jealousy, love, hate and shame, betrayal and luck all take their turn as the emotional cyclone envelops all the characters against a backdrop of all-out war.
Posted by UW-Stout Library at 10:47 AM No comments: 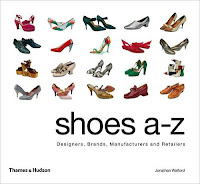 Shoes a-z by Jonathan Walford.  Library Call Number: GT1130.W35 2010.
For the designer, appreciator and shoe junkie, Thames & Hudson Publishers have put out page upon page of designer female footwear for the fashion conscious.  From the silly (Grey Mer patent pump with faceted heel, page 104) to the stylish (Grey Mer patent pump with faceted heel—it’s all in the eye of the beholder), from tennies to formal, this book’s got them covered.  All the major designers are represented and there’s a nice glossary of footwear terms at the end.
Posted by UW-Stout Library at 10:43 AM No comments: