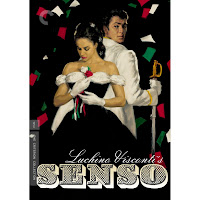 Senso, starring Alida Valli, Farley Granger and Heinz Moog. Directed by Luchino Visconti. (From the Criterion Collection.) 2010. Library Call Number: PN1995.9.L6S46 2010.
Senso has something for foreign movie lovers, designers and cinema buffs. Luchino Visconti’s lavish historical romance takes place in 1866 Venice, occupied by the Austrian Army of the Hapsburg Empire.  All is not well, however, and the Italians are uniting to drive the invaders off of their native soil. During a performance of Verdi’s Il Travatore, Venetian patriots inundate the Austrian officers in the floor seats with tri-color bouquets and handbills and several are arrested. In the midst of this political turmoil, the Contessa Livia Serpieri, troubled and distraught over her bad marriage, falls for an Austrian lieutenant. Heedless of consequences, they begin an affair as the rebellion ignites.
Valli, as the Contessa, delivers a charismatic performance and Visconti was smart enough to make her the focus of nearly every scene. The costuming and lush scenery are unequaled and won the film a Golden Lion on its release in 1954.  The Criterion Collection’s restoration includes all of the vibrant color, the English language version The Wanton Countess, as well as the full 123 minute original director’s cut, that recreated the Battle of Custozza, deleted from the original release in its homeland because it depicted an Italian defeat.
Posted by UW-Stout Library at 10:35 AM No comments:

Heaven’s Keep by William Kent Krueger. Library Call Number: PS3561.R766 H43 2009.
St. Paul writer Kent Krueger has turned his Cork O’Connor mysteries into a top-tier series and he outdoes himself in Heaven’s Keep.  The story this time begins with O’Connor’s attorney wife, Jo, traveling west with clients when their charter plane flies into a blizzard and disappears in a wild part of the Wyoming Rockies.
Cork's frantic son convinces him to go west to find her, but a search in the rugged country in the winter is all but impossible. Months pass, and just as he is coming to terms with the death of his wife, the missing pilot’s wife comes to O’Connor with the stunning news that she doesn’t believe her husband was the man flying the plane, and that an investigator she’s hired to look into the crash has himself disappeared in Wyoming.  So begins a family odyssey, searching for the truth.  Who was flying the plane, was it truly an accident and—most importantly—what happened to the people on board?
Posted by UW-Stout Library at 10:22 AM No comments:

Top Gun: Video Gaming Obsession and Addiction. producer/director Marie Caloz; written by Gillian Findlay.  Library call number: GV1469.17.S63T67 2009.
“When the Crisps confiscated their teenage son Brandon's Xbox, they never expected him to run away from home…or to die from injuries sustained while in hiding. Using Brandon's story as a case study, this program delves into the growing psychological problems of video game obsession and addiction. Interviews with Brandon's parents and best friend, a family therapist whose patient list includes video gamers, and a psychologist who pushed the video gaming industry to adopt a ratings system provide insights into the obsessive and addictive aspects of video gaming. But virtual realms are also an arena for real-world achievement, attracting highly skilled players and their fans, professional coaches, big-name sponsors, and six-figure purses. Members of a pro-gaming team and CEO of a pro-gaming circuit present their views as well. Game over, or game on?" -- From container.
Posted by UW-Stout Library at 12:37 PM No comments:

Riding Bean Rules the Road created by Sonoda Kenichi, directed by Hasegawa Yasuo.  Library Call Number: PN1997.5.S87R52 2002.
An anime classic, with designs by the iconic Sonoda Kenichi, Riding Bean has all the action and style of a classic in the genre and could have been the inspiration for Jason Statham’s Transporter movies.
The Product description states: "In Chicago, ace courier Bean Bandit rules the road, and operates on both sides of the law. If cargo absolutely positively has to be there NOW, Bean’s your man for a price. Bean’s latest cargo is a 10-year-old girl who's worth 50 grand when delivered home, but what he doesn't know is that she's already been kidnapped, and he's about to be framed for the snatch. Meanwhile, the real kidnappers are making off with the $2,000,000 in ransom money."
Posted by UW-Stout Library at 2:47 PM No comments:

The Quiet War by Paul McAuley. Library Call Number: PR6063.C29Q54 2009.
Earth in the 23rd century has been decimated by ecological catastrophe. Dissidents fleeing the corporate nations of the home planet have long ago terraformed and colonized the far corners of the solar system and reaped huge benefits through biogenetic alterations to the human body.  The corporations, complete with their own governments and military forces, are beginning to look at the “Outers” as increasingly foreign, possibly no longer even part of the human race.  Already they’ve had to deal harshly with a rebellion on Mars.  The people of Earth also desire the riches promised by the innovators of the outer planets. The corporations believe they own the colonies on the moons of Jupiter and Saturn, on Neptune and even faraway Pluto.  But the colonists have their own ideas of freedom and many would like nothing better than to cut all ties with Earth. Something has to be done; the ruling Earth families begin small provocations, ratcheting up the pressure, beginning a quiet war.
Posted by UW-Stout Library at 2:40 PM No comments:

Games that Changed the Game: the evolution of the NFL on seven Sundays  by Ron Jaworski, with Greg Cosel and David Plaut. Library Call Number: GV955.5.N35 J39 2010.
Ron Jaworski, former Philadelphia Eagle quarterback turned sportscaster, gives the football fan a chance to look at seven innovations in the pro game that made big differences in the current state of football.  Interested readers will come away with new appreciations for football as true Sunday classics are described, each in their own chapters.  From the 4-6 defense to Air Coryell, the ESPN broadcaster breaks down some of the best and biggest ideas ever to come along, the coaches who developed them and the men who executed the new strategies on the field.  This is a great read for a football fan.

Posted by UW-Stout Library at 11:09 AM No comments:

Inside Job, produced, written & directed by Charles Ferguson; co-written by Chad Beck & Adam Bolt. Library Call Number: HB3717 2008 .I57 2011.
Back in 2008, when the dust cleared, over $20 TRILLION dollars had been lost in the bursting real estate bubble and the ensuing global financial meltdown.  Iceland, Greece, Spain, Portugal and several other European countries now hover on the brink of collapse.  America is in the grip of the worst unemployment and consumer money woes since the Great Depression.
Among the only people the Great Recession has barely touched were the bankers who caused it.  Rounding up the information on what burst the bubble,  this film exposes an entire industry gone rogue, one that has corrupted politics, the regulations that were designed to keep it honest and even academia.  Not a good film to watch if you’re already outraged over the financial industry, this film won the following prizes:
Academy Award for Best Documentary Feature, 2010 ; Winner, Outstanding Directorial Achievement in Documentary (Charles Ferguson), 2011 Directors Guild of America Awards ; Winner, Best Non-fiction Film, 2011 National Society of Film Critics Awards (USA) ; Winner, Best Documentary Screenplay (Charles Ferguson, Adam Bolt, Chad Beck), 2011 Writers Guild of America Awards.
Posted by UW-Stout Library at 11:04 AM No comments:

Annie Hall, Starring Woody Allen and Diane Keaton. Directed by Woody Allen. (Released 1977.) Library Call Number: PN1995.9.C55A55 1998.
Woody Allen had made several previous, funny, but uneven movies before Annie Hall came along and gave him his groove. Winner of three Academy Awards—for Best Picture, Best Director and Best Actress—the movie follows Allen’s semiautobiographical character, comedian Alvy Singer, and his relationship with Annie Hall, played by Keaton.  Full of asides, small, interesting vignettes, and awkward but poignant moments, their romance from beginning to end illustrates a point in time in the decade of the 1970’s, New York, and the personae of two people who don’t quite fit the time and place in which they find themselves.  Along with Manhattan, this is one of Allen’s best early films, rated #140 on the IMDB’s list of all-time great movies.
It is often referred to as a film that captured the difficulties of love in the 70’s and apparently did strike a chord worldwide—it won best Foreign Film that year in Germany, Spain and Denmark, and was nominated for best Foreign Film in France.
Posted by UW-Stout Library at 11:27 AM No comments:

Juliet by Anne Fortier. Library Call Number: PS360.O7487J85 2010.
Itinerant theater director Julie Jacobs is shocked when her beloved great-Aunt Rosa dies, leaving almost everything to Julie’s twin sister Janice.  Julie receives only a letter and a key—the letter tells her the lock for the key is in a safe-deposit box in Siena, Italy.  Traveling there, she discovers her roots go all the way back to the original Juliet of Shakespeare’s play. And that’s just the first part of a combined treasure hunt and love story that involves the modern-day Montagues and Capulets, numerous relics for clues, vendetta, danger, mystery and, of course, a love story worthy of the descendants of Giuletta. Publisher’s Weekly says, ”Readers enjoy the additional benefit of antique texts alternating with contemporary narratives, written in the language of modern romance and enlivened by brisk storytelling. Fortier navigates around false clues and twists, resulting in a dense, heavily plotted love story that reads like a Da Vinci Code for the smart modern woman.”
Posted by UW-Stout Library at 11:22 AM No comments: