The Ragged End of Nowhere, by Roy Chaney. Library Call Number: PS3603.H35726R34 2009.
Bodo Hagen, late of the CIA, has come back home to Las Vegas after ten years.  His brother has been murdered.  Ronnie had just survived a stint in the Foreign Legion, only to be gunned down in the desert near Hoover Dam.  But Ronnie didn’t end his service empty-handed.  He had a relic from overseas in his possession—possibly a stolen artifact, certainly a valuable one.  The only question is who would kill Ronnie to get it?  Whoever it was, they’re about to find out that Ron Hagen wasn’t the only dangerous brother in the family.
Chaney’s strong first novel, winner of the Tony Hillerman prize for best Mystery in the modern American West, is a page-turner of a thriller, with a keen eye for Las Vegas and the sometimes shadowy denizens in its background.
Posted by UW-Stout Library at 5:20 PM No comments: 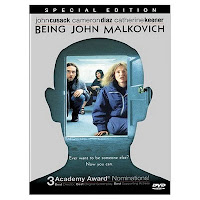 Being John Malkovich starring John Cusack, Cameron Diaz, Catherine Keener and John Malkovich, directed by Spike Jonze.(1999.) Library Call Number: PN1995.9.S85B44 2003.
In this truly weird movie from the great director Spike Jonze, Cusack plays Craig Schwartz, a struggling puppeteer forced to take a day job as a filing clerk in a nondescript doctor’s office.  His desk and the files are on the 7½ floor and it’s just that—half a floor, about four feet high.  Craig spends his time hitting on bored but attractive coworker, Maxine, even though he’s a married man, and no one on the floor seems to mind they’re spending all day in a crouch. That would be weird enough, but then Cusack finds a hidden door; go through it and you end up inside John Malkovich’s head for fifteen minutes, after which you’re ejected into a ditch along the New Jersey Turnpike.  In no time at all, Craig has turned it into a business, offering people the chance to be Malkovich for $200 a turn.
Things quickly get complicated, however, when Craig’s wife tries the door, has a date with Maxine, and ends up in bed with her—as Malkovich.  There is also a small problem with the actor, who is becoming increasingly paranoid as he feels all these strange people and voices in his head.
Probably the most unpredictable movie you’ll ever see, Being John Malkovich is an original.
Posted by UW-Stout Library at 5:17 PM No comments:

Hidden Battles, directed by Victoria Mills, distributed by VSM Productions. 2010.  Library call number: RC550.H53 2010.    Interviewing five soldiers from around the world, this documentary looks at the single most affecting act of soldiering—that of killing another human being.  An Arab man who began as a boy in the Al Aqsa Martyrs Brigade,  tells how the struggle took his whole family and left him with the feeling he and death are connected.  An American sniper in Somalia comes home with recurring memories that won’t go away, even when he moves his family to Scotland.  A housewife from New York recalls her time as a Sandinista in Nicaragua.  Saar, an Israeli soldier, tries to overcome his memories, yet finds them always with him.  And George still struggles with the killing from Vietnam and tries to help others from more recent wars.  All try to reconcile their killing of another human being with the rest of their lives.  Selected for numerous film festivals and acclaimed by critics, Hidden Battles provides a look at the resilience of the human mind.
This video is available on the 3rd floor of the University Library.
Posted by UW-Stout Library at 10:01 AM No comments:

The Last Bridge by Teri Coyne. Library Call Number: PS3603.O975L37 2009.
"For ten years, Alexandra 'Cat' Rucker has been on the run from her past. With an endless supply of bourbon and a series of meaningless jobs, Cat is struggling to forget her Ohio hometown and the rural farmhouse she once called home. But a sudden call from an old neighbor forces Cat to return to the home and family she never intended to see again. It seems that Cat's mother is dead. What Cat finds at the old farmhouse is disturbing and confusing: a suicide note, written on lilac stationery and neatly sealed in a ziplock bag, that reads: 'Cat, He isn't who you think he is. Mom xxxooo' One note, ten words--one for every year she has been gone--completely turns Cat's world upside down. Seeking to unravel the mystery of her mother's death, Cat must confront her past to discover who 'he' might be: her tyrannical, abusive father, now in a coma after suffering a stroke? Her brother, Jared, named after her mother's true love (who is also her father's best friend)? The town coroner, Andrew Reilly, who seems to have known Cat's mother long before she landed on a slab in his morgue? Or Addison Watkins, Cat's first and only love? The closer Cat gets to the truth, the harder it is for her to repress the memory and the impact of the events that sent her away so many years ago" -- from publisher's web site.
Posted by UW-Stout Library at 9:52 AM No comments:

Dying for Heaven: Holy pleasure and suicide bombers—why the best qualities of religion are also its most dangerous by Ariel Glucklich.  Library Call Number: BP190.5.T47G57 2009.
From the Library Journal review, (11/1/09):
With profound clarity, insight, and skill, Glucklich (Hinduism, Georgetown Univ.; Sacred Pain) e nters into the fray of post-9/11 discourses on religion…by examining the social, psychological, and historical roles of pleasure. Moving away from an oft-perceived Islamic-West dualism, Glucklich probes the very nature of what it means to be religious and the attractiveness of becoming religious. In nine chapters, he digs into the role that such concepts as pleasure, happiness, humor, and ridicule play in the social and religious realities of our worlds (Islamic or not), complete with examples from Mozart to the KKK….He successfully elucidates both the emotive and the visceral foundations of not only the suicide bomber but also our Western perceptions and reactions…Extremely well written, and at times quite funny (e.g., when Glucklich writes about humor), this book is an absolute necessity for a public seeking to understand religious nuance and zealotry; it deserves careful attention and a broad readership. Highly recommended.  -–Anthony J. Elia, JKM Library, Chicago, IL.
Posted by UW-Stout Library at 8:30 AM No comments: 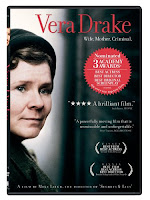 Vera Drake, starring Imelda Staunton, Richard Graham and Eddie Marsan. Directed by Mike Leigh. 2004. Library Call Number: PN1995.9.S6V46 2005.
Best known for her later work as the creepy, sadistic Dolores Umbridge in Harry Potter movies, Imelda Staunton shows her great range by playing a sweet, working-class housewife in 1950’s England.  Kind to her friends and devoted to her family, Vera Drake is a lovely saint of a woman, a house-cleaner by day, who also finds the time to care for her sick mother and a handicapped man in the neighborhood and still watch over her husband, son and daughter.  Then, at night, she sometimes goes out to help women who have found themselves in some “difficulty.”
Vera Drake shows the shattering effects of criminalizing abortion, both on the unfortunate women facing an unwanted pregnancy and on the sympathetic, well-meaning, but potentially dangerous people who tried to help them.  A remarkable film in many ways, not least because, though nominated for an Academy Award for Best Screenplay, the actors adlibbed their lines—the Director had to ‘reverse engineer” a screenplay from what was already on film. Staunton was also nominated for Best Actress that year.
Posted by UW-Stout Library at 8:26 AM No comments: