Horoscopes for the Dead: poems  by Billy Collins.
Library Call Number: PS3553.O47478H67 2011.
The 2001-03  United States Poet Laureate, Collins writes seemingly simple verse, that somehow remains enigmatic.  The Publisher’s Weekly Review states:
Collins's gently ironic, gently elegiac work…has slowly constructed a pitch-perfect purgatory, and this death-themed ninth collection seems to want to make it as literal as possible: it opens as the speaker stands "before the joined grave of my parents" and asks, "What do you think of my new glasses?" In a poem titled "Hell," the speaker has "a feeling that is much worse/ than shopping for a mattress in a mall,/ of greater duration without question,/ and there is no random pitchforking here,/ no licking flames to fear,/ only this cavernous store with its maze of bedding." …despite the prosaic settings and everyday language, Collins is after the big questions: of life, death, and how to live. But the world is not of his making, and his is a temperament oddly suited to a world where "the correct answer" to questions like why the stars appear as they do, strike "not like a bolt of lightning/ but more like a heavy bolt of cloth.”
Posted by UW-Stout Library at 9:30 AM No comments:

Over the Hedge, A DreamWorks animation directed by Tim Johnson and Karey Kirkpatrick.  With the voices of: Bruce Willis, Gary Shandling, Wanda Sykes, Nick Nolte, Allison Janney and Steve Carrell, among others. 2006.
Library call number: PN1995.5.A5O93 2006.
A clever, very funny movie from the creators of Shrek.  When a crew of forest animals awaken from hibernation, they not only find a new subdivision right next to their forest, they discover RJ, the raccoon, waiting for them.  He’s anxious to show them the huge amount of food humans throw away that’s sitting in trash cans just across the hedge.  The sometime leader of the animal crew, Verne the tortoise, wants nothing to do with the humans, after a bad experience with two boys, but RJ tempts the rest into bad behavior. What they don’t know is, RJ ate a bear’s entire stock of food and only has two weeks to replace it—or become a bear lunch himself.  Throw in a manic guard dog and a crazy animal control officer and it’s obvious the animals are in way over their heads.
Posted by UW-Stout Library at 9:28 AM No comments: 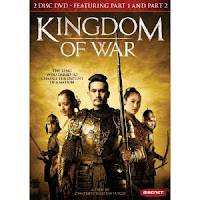 Kingdom of War, parts 1 and 2, starring Sarunyu Wongkrachang and Sorapong Chatree, directed by Chatreechalerm Yukol. 2006. (Thai with English subtitles.)  Library Call Number: PN1995.9.F67K56 2011.
One of the few movies out of Thailand to make a splash, Kingdom of War is a grand epic biopic about King Naresuan, who won Siamese independence from Burma in the 16th century.  With vivid color, breathtaking cityscapes and large battle re-enactments, Kingdom of War requires some patience in Part 1, as it provides background on the intricate and devious politics of the times. With the region divided into dozens of small kingdoms, each ruler is trying to topple their Burmese conqueror and establish their own empire.  When King Bayinnaung overcomes the Siamese kingdom of Ayudtthaya, he takes the nine year-old Prince Naresuan as hostage, insuring his father’s kingdom remains loyal. The King sends the boy to live and study with a Buddhist monk, where the Prince learns martial arts and politics in equal measure.  Naresuan befriends two orphans living with the monk, who eventually become his Princess and his general, while making an enemy of the King’s sons.  Part 2 begins with the death of Bayinnaung, the succession of his son, who hasn’t forgotten or forgiven Naresuan and sends him to enforce the Burmese sovereignty over a mountain kingdom in revolt, while laying an ambush.  When Naresuan escapes, he prepares his first epic battle with the Burmese.
Posted by UW-Stout Library at 11:37 AM No comments:

﻿
Pacific Air: how fearless flyboys, peerless aircraft and fast flattops conquered the skies in the war with Japan by David Sears.
Library Call Number: D773.S43 2011.
David Sears brings to life the air war in the Pacific, through the stories not only of the combat pilots, but of the engineers in America responsible for designing the wartime aircraft at Grumman. Alternating his narration of how F4F Wildcats fared against the Mitsubishi Zero with the evolution of Grumman designs on the home front that led to the F6F Hellcat, Sears provides the reader with an understanding of how designs improve during war.  From the Battle of the Coral Sea to the Battle of the Marianas, Grumman planes were in the forefront of the fighting and the memories of the pilots provide a great deal of drama and insight into the vast theater of the Pacific War.
Posted by UW-Stout Library at 11:32 AM No comments:

Looking for the WilsonWeb database link and can't find it?  Use the EBSCO link!  As of January, EBSCO will have transitioned all Wilson databases onto the EBSCOhost platform.

What this means for you is:
Also note that after selecting EBSCO from the Library Home Page, there is a NEW link to predetermined sets of databases by subject:

Try it out at EBSCO or look for the EBSCO link on the Articles/Databases tab on the Library Home Page.
Posted by UW-Stout Library at 9:58 AM No comments: