A Dark Anatomy by Robin Blake.  Library Call Number:PR6102.L347D37 2012.
Coroner Titus Cragg is called from breakfast by a servant boy from Garlick Hall-- home of the prestigious county squire—with ghastly news.  The squire’s wife, Dolores Brockletower, has been found in the woods with her throat savagely slashed.  So begins an English mystery in the time of King George II.  Relying on wits and the help of his friend, the learned doctor Luke Fidelis, Cragg needs to quickly unravel the roots of the murder.  Was it the work of anatomists, who ply their trade illegally?  Could it have been the result of those jealous of the squire, or the lady, or those in line to inherit the land and Hall of the Brockletowers? Was it, as some of the common people believe, an act of Woodoo?  For Dolores was not of English lands, being a West Indies planter’s daughter brought home by the squire in his sailing days.
An historical mystery with lots of the flavor of the age, Blake’s book is a surprising juxtaposition of the old and new and the result is a satisfying jump into the 18th century.

Posted by UW-Stout Library at 3:25 PM No comments:

Blood and Oil the Media Education Foundation presents; featuring Michael T. Klare; directed by Jeremy Earp; Library Call Number: HD9566 .B66 2008.
From the Film Synopsis:
“This film unearths declassified documents and highlights forgotten passages in prominent presidential doctrines, showing how concerns about oil have been at the core of American foreign policy for more than 60 years. As a result, the contemporary energy and military policies of the U.S. are virtually indistinguishable…
“At the heart of this story is a meeting between President Franklin Delano Roosevelt and Saudi King Abdul Aziz Ibn Saud on Valentine’s Day, 1945, aboard the USS Quincy in Egypt’s Great Bitter Lake. In that meeting, President Roosevelt made a pact with the King that still resonates today: the United States will provide military protection for Saudi Arabia in exchange for privileged American access to Saudi Arabia’s vast oil reserves.  With methodical precision, Klare details how this meeting has spawned a series of events and presidential policies that have resulted in repeated American military operations and wars in the Persian Gulf.”


Anyone skeptical of the idea that oil drives American military and strategic policy in the Mideast and the world should see this movie.
Posted by UW-Stout Library at 3:23 PM No comments:

Check the Stout Library Catalog for call numbers and availability.
Posted by UW-Stout Library at 11:42 AM No comments:

Tears of the Sun, starring Bruce Willis, Monica Belluci, Cole Hauser, Eammon Walker.  Directed by Antoine Fuqua. 2003. Library Call Number: PN1995.9.W3T43 2005.
Critics weren’t kind to this movie when it came out, for some reason.  Maybe it seemed too dark, or disjointed.  Certainly there is a sharp break from the beginning half of the movie to the battles at the end.  Willis stars as Lieutenant Waters, a Navy SEAL who leads his team into the Nigerian jungle to save four American doctors and nurses from being killed by one side of a raging civil war.  The doctor, however, won’t go without her patients, so the SEALs involuntarily force her and the others onto the helicopter for extraction.
On the way out, Waters sees the advancing army burning and murdering as it comes.  Suffering a sudden pang of conscience, he decides to do the right thing, turns the helicopters around and lands to protect the 70 or so refugees from the hospital.  His superiors, however, will not send the copters back, forcing the SEALs, the American medical staff and the refugees to flee on foot to safety in Cameroon, pursued by an overwhelming force.  The dialog might be standard and the battles seem like Hollywood intruding on a thoughtful movie, but the tone and scenes, the camera-work and the emotional weight of the characters are all remarkable
Posted by UW-Stout Library at 11:34 AM No comments:

How We do Harm by Dr. Otis Brawley, MD, with Paul Greenberg.
Library Call Number:RA395.A3B72 2012.
(Excerpt from the Atlantic’s review of the book): “In 2002, Dr. Brawley became chief of oncology and hematology at Grady Hospital [in Atlanta]. Though no longer in a leadership role at Grady, Brawley still practices there. His experiences at Grady partly inspired his new book…In what he calls a ‘guided tour through the back rooms of American medicine,’ Brawley not only takes on the unfolding catastrophe of U.S. healthcare, but also hits closer to home with chilling stories about irresponsible doctors here in Atlanta, such as some who dispense inappropriate, even life-threatening chemo.”
Dr. Brawley’s book draws on his experiences to illustrate how economics—even a doctor’s personal gain—might be influencing the overtreatment of the rich, while the poor find themselves shut off from care that might lengthen or even save their lives.  His book has unleashed a firestorm in his direction and for good reason, because it challenges the public’s assumption that all doctors are concerned with their patients’ welfare, that they are fulfilling their oath to “First, do no harm.”
A vital read for all Americans who, at one point or another, will find themselves seeking a doctor’s care.

Posted by UW-Stout Library at 11:24 AM No comments: 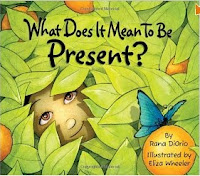 Eliza Swanson-Wheeler, a former Stout student and Library student assistant, has become a published illustrator with her work in the children's book What Does it Mean to be Present?
Eliza, who graduated in Graphic Design in 2006, worked in our Library with her filmmaker husband Adam.
Eliza's work for Children's Illustration has led to a book of her own, Miss Maple's Seeds, which is due out in April, 2013.  Congratulations from all of us in your former village. 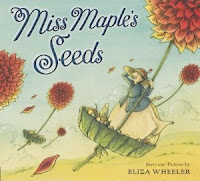 Joseph Anton by Salman Rushdie.  Library Call Number: PR6068.U757Z46  2012.
From the Publisher’s Description: On February 14, 1989, Valentine’s Day, Salman Rushdie was telephoned by a BBC journalist and told that he had been “sentenced to death” by the Ayatollah Khomeini. For the first time he heard the word fatwa. His crime? To have written a novel called The Satanic Verses, which was accused of being “against Islam, the Prophet and the Quran.”
So begins the extraordinary story of how a writer was forced underground, moving from house to house, with the constant presence of an armed police protection team. He was asked to choose an alias that the police could call him by. He thought of writers he loved and combinations of their names; then it came to him: Conrad and Chekhov—Joseph Anton.
It is a book of exceptional frankness and honesty, compelling, provocative, moving, and of vital importance. Because what happened to Salman Rushdie was the first act of a drama that is still unfolding somewhere in the world every day.
Posted by UW-Stout Library at 10:14 AM No comments:

The Stalker, starring  Alisa Freyndlikh, Aleksandr Kaydanovskiy, Anatoliy Solonitsyn. Written and directed by Andrei Tarkovsky  (in Russian with English subtitles.)       Library Call Number: PN1995.9.F67S73 2006.
In the near future, three men, each hoping for a different kind of revelation, enter a forbidding Russian wilderness known as the Zone.  The Stalker is one of the few people to have entered the Zone and come out again; he hopes to find a cure for his daughter, who entered the area and was altered by it.  The scientist is hoping for a rational explanation of how this no man’s land came to be.  Was it truly an alien force?  The reporter is trying to find some renewal of hope, something he doesn’t find in the normal world.
This is not a fast-moving film; some have called the pace glacial. But as Amazon reviewer Jeff Shannon put it: “…those who approach Tarkovsky's work in a properly receptive (and wide awake) frame of mind are likely to appreciate the film's seductive depth of theme and hypnotic imagery.”

Posted by UW-Stout Library at 10:05 AM No comments: