Beyond Babyland, a documentary by David Appleby and Craig Leake. University of Memphis; Distributed by Cinema Guild. Library Call Number: RJ60.U52T3 2010.
From the Container insert: "Of the thirty most industrialized nations, the U.S. has the worst record of infant mortality, with African American babies dying at three times the rate of whites. In some places, that rate equals those of many third world countries. When [the] filmmakers…discovered that their hometown of Memphis had the highest infant mortality rate in the country, they decided to follow those individuals who were working to reverse the statistics. Soon they began meeting some of the young pregnant mothers most at risk, and decided to concentrate much of their efforts on learning more about their particular circumstances. The film takes us from the neonatal intensive care unit where doctors and nurses fight for the lives of pre-term babies, to a county cemetery that buries so many infants the residents of the poorest neighborhoods call it ‘Babyland.’
We observe doctors, nurses, church volunteers and social workers as they try to navigate their way through dwindling resources, and we meet three teenage girls whose stories give us a glimpse into the stressful realities of the inner city—conditions that contribute significantly to the high mortality rate."
This video can be found in the 3rd floor collection.
Posted by UW-Stout Library at 8:54 AM No comments:

Girls to the Front: the true story of the Riot Grrrl Revolution by Sara Marcus. Library Call Number: ML3534.3.M37 2010.
A Brooklyn-based journalist gives a brash, gutsy chronicle of the empowering music and feminist movement of the early 1990s led by young women rock groups like Bikini Kill and Bratmobile. Politicized by such national events as the backlash against feminism in the press, the first Iraq War, and the Supreme Court's gearing up to review Roe v. Wade, young women were incensed. Kathleen Hanna, a college student from Olympia, Wash., was spurred to action after interviewing writer Kathy Acker and working for a domestic violence shelter, and she decided to start a band. Hanna, along with Tobi Vail, a fanzine writer (Jigsaw) and former punk rocker who was dating Nirvana's Kurt Cobain, were on a mission to spread female rebellion via their band, Bikini Kill. Meanwhile, Allison Wolfe and Molly Neuman, who had met at the University of Oregon, were in Washington, D.C., cobbling together their own band, Bratmobile.
Thus, writes Marcus in this compelling account, the Grrrl Revolution was sparked. Marcus enthusiastically tracks the "scattered cartographies of rebellion" and captures the combustible excitement of this significant if short-lived moment. –(Publisher’s Weekly Review)
Posted by UW-Stout Library at 8:49 AM No comments: 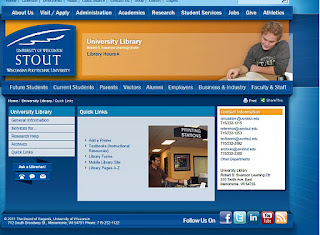 "Library" is on the top navigation bar.

We hope the new website makes locating information easier and encourage feedback to further enhance your library research! Send comments to library@uwstout.edu
Posted by UW-Stout Library at 10:33 AM No comments:

Bad Dog (a love story) by Martin Kihn.  Library Call Number: SF426.2.K49 2011.
Martin Kihn, a former television writer, was working as a management consultant, when alcoholism got the best of him.  On the verge of losing his job, family and home, he was also burdened by his pet, a huge 5-year old, untrained Bernese Mountain Dog, who knocked down visitors, chased buses, drug dealers and fried chicken boxes and frightened his entire family.
Can an older dog be trained to behave?  Both Martin—and Hola—would find out the answer to that question, as Kihn took his dog back to obedience school (where it had flunked out twice before), hoping that he could remain sober, and Hola could discover some manners.  Both would need some discipline in their lives, but maybe, just maybe, he could get his life back together and Hola could win an American Kennel Club’s Canine Good Citizen award.
Kihn’s story follows both protagonists in their journeys, the two of them linked in a bond that eventually becomes clear.
Posted by UW-Stout Library at 10:29 AM No comments:

Out of the Past, starring Robert Mitchum, Jane Greer, Kirk Douglas and Virginia Huston. Directed by Jacques Tourneur. 1947.
Chosen for the National Film registry in 1991, (along with King Kong, Chinatown and others) this noir classic features Mitchum as Jeff Bailey, a private detective hiding from his past in a small California town, running a gas station and in love with a nice girl named Ann.  But his past catches up to him when a man shows up at his station and directs him back to gambler/gangster Whit Sterling, his last client. Sterling feels Bailey owes him a debt, and forces the former detective to do one more job for him, but Bailey can see it’s a frame-up.  Douglas plays superbly against type as the gambler Sterling, but it’s Jane Greer, as Sterling’s femme fatale girlfriend, who becomes the movie’s focus. She’s ruthless, amoral, enticing and dangerous.  Jacques Torneur, who directed the moody, 40’s icon, The Cat People, brings a pitch perfect eye to this incredible film.
Posted by UW-Stout Library at 10:26 AM No comments:

Kings of Pastry, a film by Chris Hegedus and D.A. Pennebaker.  2009.
Library Call Number: TX773.K56 2011
Follow a Chicago pastry chef in his quest to win the most prestigious prize of his profession in this recent documentary.  The collar awarded to the winners of the Meilleur Ouvrier de France (Best Craftsman in France) is more than the ultimate recognition for every pastry chef - it is a dream and an obsession. The 3-day competition includes everything from delicate chocolates to precarious six foot sugar sculptures and requires that the chefs have extraordinary skill, nerves of steel and luck. The film follows Jacquy Pfeiffer, founder of The French Pastry School in Chicago, as he returns to France to compete against 15 of France's leading pastry chefs. The filmmakers were given first time/exclusive access to this high-stakes drama of passion, sacrifice, disappointment and joy in the quest to have President Sarkozy declare them one of the best in France.
(This video is available in the 3rd floor collection.)
Posted by UW-Stout Library at 11:52 AM No comments:

The Sisters Brothers by Patrick Witt. Library Call Number: PS3604.E923S57 2011.
Eli and Charlie Sisters are hired guns, instructed by their boss, the Commodore, to head down from Oregon City to San Francisco and there shoot an old prospector named Herman Kermit Warm.  It’s a long ride on horseback to San Francisco, though, and Eli, being the introspective type, has come to question their long association with killing, not to mention his brother’s shortcomings and his own choice of horses.  Eli’s narration of their journey is full of many striking characters, among them: a witch, an insane hermit, a forlorn lost boy, murderous hiders and dangerous saloon girls.
A funny, sad, truly unique, genre-twisting Western, that portrays the boys as alternately bloodthirsty and bound by blood, horrifying and somehow sympathetic.
Posted by UW-Stout Library at 11:47 AM No comments: