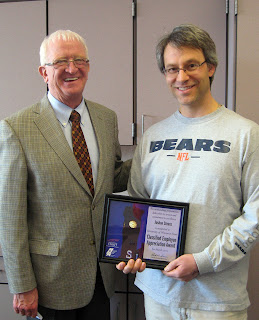 Josh Steans manages Interlibrary Loan services in the University Library.  Yesterday he was recognized for his commitment to providing stellar service for the Stout community.

It was noted: “he treats every library patron with his undivided attention, positive attitude and truly genuine smile” from freshmen to tenured faculty.  Josh “helps create a great environment and makes the library a better place for students and staff to work and study.”

Congratulations Josh!
Posted by UW-Stout Library at 10:16 AM No comments:

Velma Kelly, a one-time club singer, found her boyfriend and sister in bed together and shot them both.  Roxie Hart’s boyfriend said he’d make her a star, but all he wanted was her body.  When she found out she wasn’t going anywhere with the bum, she shot him, too.  Now Velma and Roxie are on Death Row together with an ace up their sleeve: high-rolling lawyer Billy Flynn.  He’s never let a pretty woman burn in the chair for murder and he won’t start now.
Originally a monster Broadway play by Maurine Watkins (see the Browsing Book of the Week), Chicago was made into a musical after her death.  Though based on 1920’s event, the newspaper sensationalism and overwhelming sexism linger in the 21st century.  Winner of six 2002 Oscars—including Best Picture—as well as top awards in 2003 from the American Film Institute, the American Choreography Award, the highest awards in Japan, Norway Great Britain and over 35 other honors, Chicago is a satirical gem.

Posted by UW-Stout Library at 8:52 AM No comments: 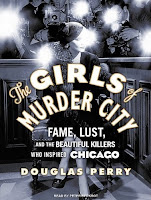 The Girls of Murder City: Fame, lust and the beautiful killers who inspired Chicago by Douglas Perry. HV6517.P475 2010.
In 1924, with Prohibition the law of the land, booze in Chicago was more prevalent than ever.  Speakeasies, illegal gin joints and jazz clubs were everywhere, well supplied by Dion O’Banion, Johnny Torrio and Johnny’s lieutenant, Al Capone.  It was also a time when women journalists were hired for the Sunday articles—home and fashion—and the men did the hard news.
But Maurine Watkins, a preacher’s daughter from Indiana was determined to make it as a newswoman; she started at the Tribune covering homicides.  Chicago, after all, was rich with murder, even before the gang wars, and nothing was more peculiar than the tendency of women in the Second City to get drunk and shoot their boyfriends; nothing, that is, except the other peculiar fact that all-male jurors seemed to find an attractive young woman accused of murder “Not guilty.”
For Maurine, with her religious morals, this was unconscionable.  Two beauties, Beulah Annan and Belva Gaertner were both coming to trial, both of them guilty as hell.  Maurine tried to become the voice of justice and morals for the city, all the while swimming against the tides of sexism and sensationalism.
But eventually, she would get a hit Broadway play out of it.

Posted by UW-Stout Library at 8:47 AM No comments:

Synopsis excerpts from the Internet Movie Database (IMDB):
What has happened to us? Despite the most advanced medical technology in the world, we are sicker than ever by nearly every measure. Cases of diabetes are exploding…half of us are taking at least one prescription drug and major medical operations have become routine. Heart disease, cancer and stroke are the country's three leading causes of death...Millions suffer from…degenerative diseases. Could it be there's a…solution so comprehensive…that it's mind-boggling that more of us haven't taken it seriously?
FORKS OVER KNIVES examines the profound claim that most, if not all, of the so-called "diseases of affluence" that afflict us can be controlled, or even reversed, by rejecting our present menu of animal-based and processed foods. …The film traces the personal journeys [of two eminent researchers]…Inspired by remarkable discoveries in their young careers... Their research separately and independently led them to the same startling conclusion: degenerative diseases like heart disease, type 2 diabetes, and even several forms of cancer, could almost always be prevented-and in many cases reversed-by adopting a whole foods, plant-based diet. Despite the profound implications of their findings, their work has remained relatively unknown to the public. Written by Brian L. Wendel

Posted by UW-Stout Library at 10:54 AM No comments:


Before I Go to Sleep by S.J. Watson.  Library Call Number: PR6123.A884B44 2011.
Every day, Christine Lucas wakes up and doesn’t know her name or the name of the man in bed next to her.  She has no memories at all until he tells her he’s her husband, Ben, that they are married and that she’s had a car accident that has damaged her brain’s ability to remember. She has been this way for a number of years, ever since the accident.   But, lately, each day after Ben goes to work, Christine gets a phone call from a man who says he’s her doctor, who tells her to look for a journal she is keeping hidden in the closet.  The journal contains all the pages she has written in the course of days past, where she is attempting to recollect and recreate her life.  There are glimpses of friends and family in the journal, shadows of people who might once have been important in her life, although she can’t remember them.  And written in the front cover are three unsettling words: Don’t trust Ben.
Posted by UW-Stout Library at 10:48 AM No comments:

Anchorman: the Legend of Ron Burgundy, starring Will Ferrell, Steve Carell, Paul Rudd and Christina Applegate.  Directed by Adam McKay. 2004.  Library Call Number: PN1995.9.C55A64 2004.
Will Ferrell is kind of an ADHD comedian—his movies never seem to gain true focus, running all over the plot line with tangents, diversions and digressions, almost like improv is being slathered over the story line.  Still, he finds the funny spots a lot.
In Anchorman, Ferrell plays Ron Burgundy, the king of 1970’s San Diego TV news, and the biggest ego west of the Rockies.  His all-male news crew includes Steve Carrell as a chuckleheaded weatherman, Paul Rudd as a reporter and David Koechner as a former jock turned sports anchor.  It’s a comfortable man’s world for Burgundy, with everyone fawning all over him, until his kingdom is threatened by Veronica Corningstone (Christina Applegate), a new reporter with anchor ambitions of her own.
Applegate is pretty good as the woman who rattles the testosterone cage of the news set and there are enough laughs to justify a viewing. You either like Ferrell or you don’t—if you like him, this is worth a look.

Posted by UW-Stout Library at 9:28 AM No comments:

God is Not One: the eight rival religions that run the world—and why their differences matter by Stephen Prothero.  Library Call Number: BL80.3.P76 2010.
Prothero sets out with the interesting premise that religions are not all pointed in the same direction—at the same omniscient, omnipotent Being—but are, on the contrary, beginning at different philosophical points and experiences of faith and order, and expanding from there.  By contrasting their differences, he hopes to paint a fuller picture of different cultures and what they seek in their faith.  The book is controversial, especially in the inclusion of Confucianism—which can be argued is a philosophy and not a faith—and atheism, which is shown only at its furthest extreme.  Still, the author has written an illuminating book with plenty to ponder.  Readers may come away from the book with a feeling that, like the blind men with the elephant, they have not yet reached a full comprehension of what God means.  They may, however, find a larger appreciation of the beliefs of others.

Posted by UW-Stout Library at 9:26 AM No comments: