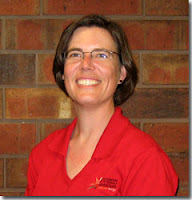 Ann Vogl joins the library staff as the Reference/Distance Learning Librarian.  She is head of the Reference Work Group and works extensively with distance learning instructors to provide the best customer service possible to off-campus users.
Ann earned her Masters in Library and Information Studies from the University of Wisconsin-Milwaukee and a Bachelor's of Business Administration from UW-Whitewater. 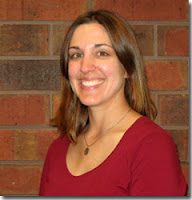 Bridget Krejci began working in the Cataloging/Processing area of the library in May 2013.  In this position, she provides thorough and efficient access to the books and other materials owned by the Stout Library.
Posted by UW-Stout Library at 3:25 PM No comments:


The First Clash: the miraculous Greek victory at Marathon—and its impact on Western civilization by Jim Lacey.  Library Call Number: DF225.4.L332011.
Author Lacey, a veteran and military historian, takes a fresh look at the battle of Marathon, when a small army of about 9,000 Athenians, aided by 1,000 Plateans, took on the vanguard of the Persian army of Darius I.  Outnumbered about 2 to 1, the battle developed in such an unexpected way that it left possibly half the Persians dead at the loss of less than 200 Greeks.
The book jacket states:
…Lacey shows how the heavily armed Persian army was shocked, demoralized, and ultimately defeated by the relentless assault of the Athenian phalanx, which battered the Persian line in a series of brutal attacks. He reveals the fascinating aftermath of Marathon, how its fighters became the equivalent of our “Greatest Generation,” and challenges the view of many historians that Marathon ultimately proved the Greek “Western way of war” to be the superior strategy for fighting—and winning—battles to the present day.
Immediate, visceral, and full of new analyses that defy decades of conventional wisdom, The First Clash is a superb interpretation of a conflict that indeed made the world safe for Aristotle, Plato, and our own modern democracy. But it was also a battle whose legacy and lessons have often been misunderstood—perhaps, now more than ever, at our own peril.

Posted by UW-Stout Library at 4:37 PM No comments:

The Ladykillers, starring Peter Sellers, Herbert Lom, Alec Guinness and Katie Johnson.  Directed by Alexander MacKendrick. 1955.          Library Call Number:PN1995.9.C55L33 2002
The original English version of this classic movie has five criminals planning a million dollar bank job in the apartment of their leader, Professor Marcus.  Renting a two-room apartment from Mrs. Wilberforce, a sweet old lady, in an isolated house, they pose as a musical quintet in order to use her as cover for their heist.  But when things begin to go wrong, there’s nothing to it but to kill the old lady, a deed easier said than done.


The Coen Brothers remake moves the action to Mississippi and the bank becomes a riverboat casino with a buried vault on shore.  Five robbers led by the blowhard Professor Dorr rent Mrs.  Marva Munson’s spare room and ask to use the basement to practice playing classical music.  Instead, while they play orchestral CDs, they dig their way to the money. Not a great success at the box office, but still a very funny movie and film buffs will love comparing the two versions.
Posted by UW-Stout Library at 4:34 PM No comments: 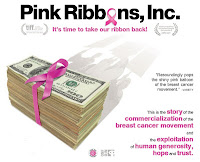 Pink Ribbons, Inc. a documentary film by Lea Pool. Written by Patricia Kearns & Nancy Guerin and Lea Pool. Presented by the National Film Board of Canada.

Library Call Number: RC280.B8P56 2012.
By now, the symbolism of the Pink Ribbon is known to just about everyone. Support for the campaign against breast cancer is all over and the pink ribbons, armbands t-shirts, sweatshirts, socks and hats can be found from NFL games to marathon runs across America. But there is controversy involved in some of the Komen Foundation’s work.
As the National Film Board of Canada’s summary says: “Breast cancer has become the poster child of corporate cause-related marketing campaigns. Countless women and men walk, bike, climb and shop for the cure. Each year, millions of dollars are raised in the name of breast cancer, but where does this money go and what does it actually achieve? Pink Ribbons, Inc. is a feature documentary that shows how the devastating reality of breast cancer, which marketing experts have labeled a "dream cause," becomes obfuscated by a shiny, pink story of success.”

Posted by UW-Stout Library at 8:48 AM No comments:


Mickey Haller, hero of Connelly’s The Lincoln Lawyer, returns a third time to the Los Angeles county courthouse, but with a twist—this time he’s working the other side of the bench, prosecuting Jason Jessup, a man who has spent 24 years in prison for killing a child before DNA evidence got his sentence reversed.  The District Attorney wants to retry him, but doesn’t want his office tainted by failure if the reversal is upheld.  He offers Haller a proposition: convict Jessup and your ex-wife, currently prosecuting criminals in the Valley, far from LA, gets out of exile and returns downtown.  Haller, in turn, agrees, as long as his half-brother, Harry Bosch, can be the chief investigator.  Both of them believe Jessup is guilty.  And since both have daughters about the age of Jessup’s victim, they both have an emotional stake in putting him back behind bars.
So begins another taught courtroom drama from a writer who matches Scott Turow in turning legal cases into page turners.


Posted by UW-Stout Library at 8:45 AM No comments: